Smoke and heat detector, designed for early detection of a developing fire. In addition to providing information about the hazard to the control panel, the MSD-300 detector can warn of the danger, using the built-in siren. In contrast to conventional smoke detectors, this device will react not only to visible smoke, but also to a rapid increase in temperature, thus providing more complete protection against the danger of fire. 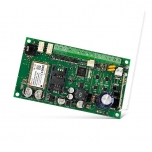